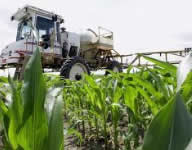 Superweeds have developed as a result of repeated exposure to the Roundup herbicide. Resistance evolves after a weed population has been subjected to intense selection pressure in the form of repeated use of a single herbicide.

Monsanto also produces genetically engineered seeds that are tolerant of glyphosate. These are known as “Roundup Ready” crops. The genes contained in these seeds are patented. Such crops allow farmers to use glyphosate as a post-emergence herbicide against most broadleaf and cereal weeds. Soy was the first of these “Roundup Ready” crops and became commercially available in 1996, followed by corn in 1998. Current “Roundup Ready” crops include soy, maize, canola, sugar beet, and cotton. Wheat and alfalfa are still under development. As of 2005, 87% of U.S. soybean fields were planted with glyphosate resistant varieties.

Glyphosate remains the most environmentally friendly weed killer recommended by weed management groups. Its price, relatively low toxicity and persistance compare favorably with all other options including hand control and flame weeding. Glyphosate is an important tool for minimum tool farming, enabling crops to be grown with much reduced tillage and carbon release.